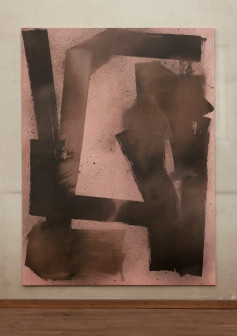 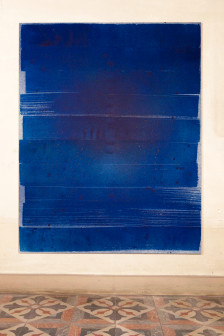 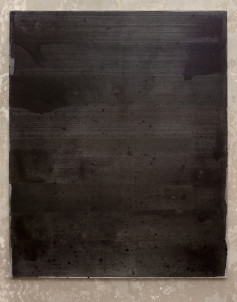 Born in Oberhauser, 1982. Lives and works in Düsseldorf.  Painting degree at Staatliche Kunstakademie Düsseldorf (prof. Albert Oehlen). Max Frintrop’s works are characterised by an investigation of and an ironic play with the concept of space. He thus presents a recurrent form, which he reduces and, at the same time, in terms of geometry, pushes to the extreme. This act of pushing forms to the extreme is intensified by an expressive painterly gesture and a dynamic treatment of colour. Ink is applied to the canvas in streaks and splatters, highly diluted or opaque. In some cases, one has the impression that the monochrome coloration dominates the entire pictorial space; at other times, it seems as though the canvas has directed the colour into particular paths. The result is a declination of colours and forms, which appears precisely calculated and at the same time spontaneous.  (lena Ipsen text)